It was a real privilege to hear former hostage Terry Waite speak last night at the LJCC. In conversation with Rabbi Jonathan Wittenberg he also read some of his poetry, admitting that it was the first time they had been heard in public. Largely about his time in captivity – most of which was spent in solitary – his poems managed to be remarkably vivid, yet disturbing.

Considering the immense volume of column inches devoted to Homeland, the US thriller/drama series which began just over a month ago on Channel 4 about a former captive soldier who returns home after being held hostage for 8 years in Iraq, the evening felt rather timely. From May, Hatufim (meaning Abducted in Hebrew, re-titled as Prisoners of War) an Israeli TV series, which is actually the inspiration behind Homeland, will be aired on Sky Arts 1. There are obvious parallels between the two series, such as the soldiers’ battle with psychological trauma. However in Hatufim, the early emphasis is strongly on the domestic: how the two former captives reintegrate into family life, as well as within Israeli society. According to series creator, Gideon Raff, ‘everybody thinks that [the homecoming] is the happy ending. In fact, that’s the beginning of their journey.’

This resonated with what Terry Waite said in response to a question about his return. He was acutely aware that both he and his family needed time to adapt; he had been away, held captive for 5 years in Lebanon. Waite found work in Cambridge which meant that he lived away from the family Mon-Fris, only returning home at the weekends. He explained that friends and family had initially commented on the decision, thinking that the marriage would dissolve. But it saved it. He needed the solitude and time to process his experiences and his family needed the opportunity to adapt slowly to his return.

There are times in Hatufim, when reality merges with fiction, for which Raff has been criticised. I wanted to ask Terry Waite what he felt about the popularity of such programmes. Does he feel they sensationalise the experience of captivity or can they be used as a means to educate, to make people aware of the consequences of hostage taking; the psychological, emotional and physical damage, both for captives and captees. Unfortunately time ran out.

I also wondered what his response was when he saw the image of former hostage Gilad Shalit flashed around the world. Does the trauma revisit? Even after 20 years? Perhaps the answer will lie in Waite’s soon-to-be-published poetry. Until then I can only surmise. 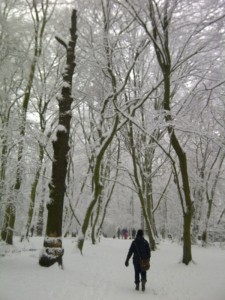 My relationship with snow used to be a reasonably good one. That is until a holiday to South Africa with friends – a year in the planning – was cancelled due to the tremendous snowfall in December 2010/11. However, yesterday you couldn’t help but be moved by the almost untouched beauty of Highgate Woods in the early morning. Particularly on the back of a visit to the fantastic Hockney exhibition, ‘A Bigger Picture,’ the day before. See more here.
As a result, my perception of landscape has been altered. 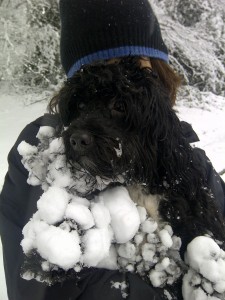 But I very much doubt that our dog cared about the Narnia-esque look of the Woods. He just loves the snow. Leaping and burrowing himself in it, he managed to get one ear and all four paws stuck with ice balls.

Not me you understand. I know I’ve had a long blogging break but this was due to my website undergoing a redesign; the blog feature is now incorporated.

Yesterday I was at Penguin Children’s media presentation. Held at the publisher’s offices on the Strand, it’s where the year’s book titles are highlighted. It was a slick – if shorter than usual – well organised, informative event, however, I couldn’t help but leave feeling a little uninspired.

Emphasis was placed on ‘reinventing the classics’ which means that two previously published classic titles have been rewritten for the modern audience – The Further Tale of Peter Rabbit (pub Sept 2012) by actor and screenwriter Emma Thompson and Leopard Adventure (July 2012) by young adult author Anthony McGowan. Both books are pegged to rather tenuous anniversaries – 2012 marks the 110th anniversary of Peter Rabbit (I was unaware that 110 was such a milestone) and McGowan’s book, a re-imagined Willard Price adventure tale, is tied to the 125th anniversary of Price’s birthday in July. Both original books can be firmly described as classic children’s texts but instead of looking to commission a potential fresh modern classic, Penguin have chosen the simpler, more marketable solution: use popular big name/writers to reinvent well loved tales. It didn’t stop there. Jacqueline Wilson came to tell us that her first Puffin title, Four Children and It (August, 2012) will be echoing E Nesbit’s novel, Five Children and It. No anniversary.

Clearly the death of their creator is no longer the end for certain literary characters or stories. Last year there were several authorised novels or sequels, commissioned by the estates and/or trusts of dead authors. Reinventing the classic.

Chitty Chitty Bang Bang Flies Again, the first of three sanctioned sequels by Frank Cottrell-Boyce; Anthony Horowitz’s The House of Silk, the first authorised modern novel version of Sherlock Holmes. This was in addition to Jeffrey Deaver’s James Bond novel. Admittedly written for adults but the idea is the same. We’ve also had Winnie the Pooh’s Return to the Hundred Acre Wood (2009) and in 2006 Geraldine McCaughrean won a competition organised by GOSH (JM Barrie gave all the rights to Peter Pan to Great Ormond Street Hospital) culminating in Peter Pan in Scarlet (OUP, 2006).

Is it a nod to vintage quality writing or it is just taking a successful brand and relaunching it for commercial gain?

Have Penguin just joined the bandwagon? 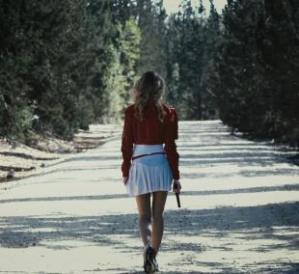 After weeks of deliberation I’ve finally decided to embrace the world of cyber conversation. The aim of this blog will be to share anything that I deem relevant to work, with a little of the personal thrown in.

Bear with me while I jazz up the blog. Fortunately I have the support of a very patient in-house technical advisor who happens to be my youngest son, N.

Off to fathom out how wordpress actually works…